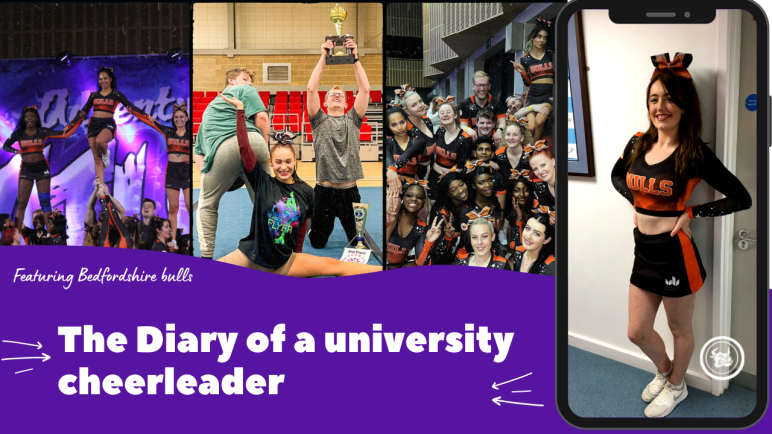 It’s actually crazy how quickly this year seems to have gone and it’s been a ride to say the least, as you guys know, but at the end of the day I wouldn’t have had it any other way. I have learned a lot this year, about cheer and myself. This was my final season as Bull and I’m glad to be going out on a high, after all the blood sweat and tears over the years.

So since the last article went live well, actually since I wrote the last article, we had our last competition at Future Cheer Adventure in Atlantis in MK, which actually concluded our season as well. I couldn’t have asked for a better last comp as Bulls cheerleader.

Honestly the whole day was so much fun. It was a bit of chaotic day for me; I had actually just come off shift in the morning of the competition, so there’s me getting all glammed up at work and making sure that I was competition ready.

I had my shift partner helping me apply fake tan at 7am- definitely one way to become closer with your colleagues!

If I haven’t said before I work in a residential home, so that was a bit weird for the people I work with- I had the kids asking me why they woke up to me looking a completely different colour haha! Luckily I wasn’t too far from the venue though otherwise I don’t think I would’ve been able to cope with the stress!

When I arrived the atmosphere was already buzzing, there had already been a morning session and it’s a really really good competition so everyone was in a good mood. It was so busy, but walking into that energy just meant that I was already in a great mood when I arrived, despite the stressful, or hectic morning it’s probably better to say.

Now the one thing I love about Future Cheer competitions, and obviously I love the all the comps anyway, but the Future Cheer merchandise is just unrivalled I swear, so obviously as my last competition on the team I had to spend a stupid amount of money in the shop whilst we are waiting. Who needs money anyway haha.

From warm up all the way through to competing the whole teams energy was just exactly where it needed to be. Obviously we had already competed once and I think that really really helped with some of the new team members to just calm their nerves and go into this competition feeling like ‘we’ve got this and whatever happens today we’ve just gotta have fun’, and that’s exactly what we did. The team as a whole actually did one of the best runs I would say,  watching the replay filled me with so much joy- that sassy energy was there, the smiles, everything. We just smashed it really. I actually think I performed worse in this one though; so I got to the dance section and, I’m sure everyone can relate sometimes, my mind just goes blank halfway through. But lucky for me no one noticed- well those who were supporting us anyway. These things happen but the important thing is to carry on!

This one was extra special because this time we had a lot of support for us, cheering us on as we performed, which I think just makes it so much better and so much easier to really go for it. So I mentioned before that our two coaches also coach an growing All-Star team in Bedford and there were a lot of young, developing cheerleaders who were desperate to see what a cheer competition was actually like. So a handful of them and their parents came to see us, and their little faces showed enough that they loved the experience, and according to the coaches and their parents, it’s given them a new attitude and energy towards their training and their future competitions that they’ll be taking part in. I love that these young cheerleaders had the opportunity to come see us because it’s nice to know that we can have an influence on them and can hopefully instil more of that passion for the sport in them, because cheerleading is growing and it’s important to show exactly what we do and exactly what we’re about, and I feel like we did that.

In terms of how we did, we were only competing against one other team, so the non tumble team from Oxford Brookes University, and I have to say looking at the scoresheet, it was much closer than we could have imagined. I’ve said before that because of our brand-new team, we created a more simple, maybe less creative routine, however we still made it look good. So at the ICC competition we didn’t score the highest on creativity which is okay, but yeah, we weren’t sure what we were gonna get when we showed up to Future Cheer. Oxford Brookes put on an amazing performance well done to them, and they deserved the first place position. However it’s still nice to know that it was a close call for us- just like our other trophy, our second-place trophy is treasured.

Because we were in the middle session of the day, we actually got to stay on a little bit longer and watch some of the world teams perform, who were incredible. That’s one thing that you miss out at all University nationals. Its  great to see other uni teams perform but then seeing the higher levels and the ones that have earned their place in worlds is insane. So the rest of the day which is really lovely to get to spend it with my team by end of the day I am just feeling really happy. I even braved flying for the first time ever. So I’ve been cheering for four years now and I have never been in the air. I have always stayed firmly on the ground happy just doing the lifting, the throwing and catching, but as it was my last time on the team I thought why not give it a go. Maybe I shouldn’t have done it outside in the concrete (although it’s now given me a funny video), of course there was every chance that I could’ve sacked it, especially since I am the queen of injuries, but I had faith in my bases and I can now say that I’ve been in the air. Having this opportunity has actually given me so much admiration for flyers, I don’t know how they do it, and I was only going to prep. I mean, I wasn’t as awful as I could’ve been; I have spent enough time as a base, knowing what bases need from flyers,  to try my hardest to do that, but I couldn’t do all the other pretty looking things they do, fair play to them! So to all my flyers, past, present and hopefully future, you have my utmost respect haha.

The Tuesday after our last competition we had our final official training session. Although some of the team had planned and organise to do some more sessions for the remainder of April this was actually the last session that I was going to be able to make it to due to work commitments picking up so this session was a bit emotional for me I suppose. I warned everyone not to say anything nice to me because I could cry but I managed to hold it together. It was just a really lovely final session with the team we started off with a nice cheer circle just chatting to each other before trying a bit of everything trying some more difficult stance looking into things that the team might want to do next year and even getting the air truck out just to throw some tumbles. Again I managed to get myself in the air, this time trying to lib, and I was actually pretty impressed with myself. That again I definitely still cannot be a flyer at my cheer facials we’re not quite there and I still laugh at the video. Although this wasn’t the last time that I receive a team it still felt like a bittersweet moment knowing that I won’t be training with them again.

As I said, this is the 2nd to last article with Cheer from Head to Toe, but there are still a little bit more to come. This month we have set our new committee for the next season and I am so happy to be handing over the torch to these guys. In the next article I’ll do a proper new committee reveal to introduce them to the CFHTT community, but all I’ll say now is that I’m excited to see what they do with the team. They already know that this isn’t the last they’ll see of me- I’m still going to be around haha, and it’s nice to know that they already can’t wait to welcome me back to support future training.

In the very beginning of May we also have our sports awards which I am really excited for. Now because of Covid I’ve actually only been to one sports awards and I just remember having a great time. That year the team that actually won Team of the year for the University, so fingers crossed we do well this year, but even if we don’t I’m just looking forward to spending a good night celebrating the season with the coaches and the team. And if anything it’s an excuse to get all dressed up which is a rarity right now. So in the next article you can look forward to hearing all about this, the new committee and my final goodbyes to the team.

If you’ve been following these articles since the very beginning I just wanted to say thank you, each month I still find it weird to put all my thoughts down but it’s been refreshing to get my voice out there and to be a part of the wider cheer community I suppose. So I hope you tune into the final article next month and then that’ll be it from me!

If you want to check out what Bedfordshire Bull cheerleader 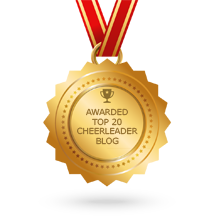